We Almost Lost Her - Part 2 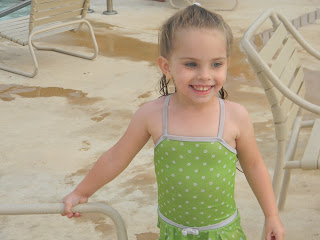 My husband is a phenomenal father.  He loves his children and takes an active roll in everything we do with them.  He's also a phenomenal husband.  He takes very good care of me...and this includes giving me breaks as I need them.  One of those ways is taking the kids to the pool.  It's fun for them, and gives mom a break.

He takes the kids swimming every other night after dinner as the norm.  I stay home and enjoy some peace and quiet.  I usually keep the baby home with me, but she had gone once before and really enjoyed the water, so Greg took her again.  Cheyenne had decided to stay home.  I was a little nervous about Greg having so many little ones with baby Amelia going, but Celeste, our 16 year old, was going too...and she helps to keep an eye on everyone.

I tend to be one of those nervous moms.  And with nine children, I worry about keeping them all safe.  Every time Greg takes them to the pool, I say the same thing to him... "Do a headcount before backing up, and keep an eye on all of our babies."  He usually just smiles, understanding that it just makes me feel better to say this even though I know he will do those things.  Then, I pray.  Every. Single. Time.  I pray for the children's safety, knowing full well that accidents happen everyday.  I also pray for any other children who may be swimming that day too!  It just breaks my heart when I hear of parents losing a child.

While at the pool Tuesday night, Greg had the little ones in the shallow end near the steps like usual.  He was in the pool with them and had the baby in his arms.  He watched them all play.  The older kids were in the pool farther down having fun.  Genevieve (3) and Jonathan (2) kept playing with a hose that led into the pool right at the steps.  Greg had to get after them a couple of times because they wouldn't leave it alone.

Again, Jonathan went back to the hose, so Greg turned around to get Jonathan away from it.  Genevieve had still been on the steps in the pool.  By the time Greg turned around...Genevieve was gone.  Thinking she had gotten out and run off to another area of the pool, he scanned the premises trying to spot her.  When he couldn't find her, he looked down into the pool.  But, between the ripples from the kids splashing and the glare of the sun reflecting on the water, he couldn't see anything.  Suddenly, he caught a faint shadow of pink at the bottom.

He walked a few steps toward her and reached down to pull her up, with baby Amelia still in his other arm.  To him, it didn't seem that long from the time he saw her on the steps to when he turned around looking for her, so he thought he would pull her up and she would just cough up some water and cry.

When he lifted her up, she was blue and lifeless.  She was not breathing.  Greg thrust her up to the side of the pool and quickly got out.  He set the baby down and yelled for the other kids, who at this point were oblivious to what had happened, to get out of the pool.  He told Celeste to call 911 and began rescue breathing.  Turns out, our cell was dead and the pool phone was not working.  No one else was around to make the call.

Celeste hurried back, picked up babyAmelia, and gathered the other children.  Providentially, a young woman walked into the pool area, saw what was happening and dialed 911.  The kids stood in utter shock watching Daddy resuscitate their sister.

Greg had done about four rounds of rescue breathing and back blows before he saw signs of life.  He gave a final breath and she began coughing and vomiting water.  The young woman stayed on the phone with 911 relaying information.

Once Genevieve came to, a gentleman from across the street ran over to assist Greg.  The man is an MTI at Lackland and was also a paramedic.  The man continued to help Genevieve expel water while Greg made the dreaded phone call home.

The ambulance was the first on the scene and the paramedics quickly took over.  Then the fire trucks and police vehicles arrived.  By this time, people had gathered outside their homes, and several had run over to assist.   Genevieve was loaded into the ambulance ready to be transported.

Cheyenne, who had chosen to run over to the pool, beat me there.  She helped gather the kids into the Suburban while Celeste was busy talking with police officers.  My daughter said a sweet woman had come over to the car to offer comforting words to the children.  How precious that woman was to do that.

At this point, Greg was about to head to the hospital in the ambulance until I flagged it down.  Greg jumped out of the ambulance and went back to the kids to help the older girls get them home.  Once he got them home, he got himself and the baby out of their wet clothes, and headed for the hospital.

God answered my prayer that day.  I prayed for protection over my children, and He watched over and protected all of them, including Genevieve.  For those of you who don't know my husband, he is a fire fighter.  He's actually an inspector now, but was on the truck for 16 years.  He was trained to save lives.  And by God's amazing grace, he saved his own daughter's life.  I marvel at the possibility that Greg's whole career, and all of his training was meant for this very day!  We will never know, but what an incredible thought.

Please pray for my husband.  He does not see himself as the hero who saved his daughter.  He sees himself as the dad who didn't prevent this from happening.  As a Christian, Greg believes and trusts in the sovereignty of God, and understands that this was no surprise to God.  But, as a father, and a human being, he's left with the guilt of it happening on his watch.  He's the one haunted by the image of his baby girl's lifeless body stuck in his head.  It will just take time for him to recover from this.  So please pray for healing and peace.  Pray also for my children, who were traumatized as well.

God has used His people to minister to our hearts and meet basic needs.  We had hundreds of people praying for Genevieve.  Friends helped by coming to the hospital to offer support.  Friends came to our home with food and snacks for the kids.  And friends drove back and forth to the hospital bringing us food and things we needed from home.  There were also phone calls, emails, prayers, love, and the kind of support that demonstrate the hands and feet of Jesus!

Our little Genevieve has made a full recovery.  She remembers some of what happened.  When I asked her how she got under the water, she said, "I sinked!"

We got home from the hospital last night.  She was so excited to see everyone and all the kids were very anxious to see her!  They had been so worried, that none of them could sleep the night before.  When it was time for bed last night, they all wanted to be near her.  So, Greg laid blankets on the girls' room floor and let them all sleep together.  It was a sweet time for our family.

We're a bit more rested today, but still exhausted overall.  For now, we're just clinging close to our family...and to our Heavenly Father, the author and perfector of our faith!


Count it all joy, my brothers, when you meet trials of various kinds,  for you know that the testing of your faith produces steadfastness.  And let steadfastness have its full effect, that you may be perfect and complete, lacking in nothing.
James 1:2-4
Posted by Candace/Chloe at 4:03 PM