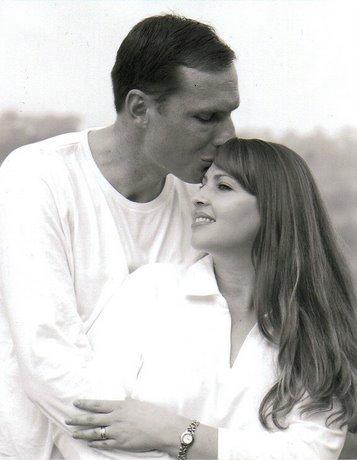 Thank you for sixteen wonderful years.......with many more to come!

Here is the poem that Greg presented to me and the kids this morning......memorized and everything. Greg has always been known to write endearing, yet humorous poems over the years. Thought I'd share!

Thank you, Lord, for blessing me with an amazing, God-fearing man!

Come here everybody, let me tell you a story,
Of a wonderful girl and a goofy boy, Oh Glory!

The girl, who's such a cutie,
Was, is, and always will be of unsurpassed beauty.

Her beauty, wit and charm,
Turned my heart into a three-alarm....
Fire, that is (that's fireman lingo).

They were wed shortly thereafter,
Amongst great cheers and joy and laughter.

Off to England, we were sent away,
To live and grow in God's way.

And then onto San Angelo,
Which was NO rendition of Michelangelo.

And then finally back home, we thought we would stay,
But was that God's plan? Oh no, no way!

He sent us to the Alamo city,
Away from family, once again, oh what a pity!

Here we've been for eight wonderful years,
Many joyful memories and some tears.

What is this.....one, two,.....and now SEVEN?
Wonderful blessings from Heaven.

Though there are no flowers, gifts, or cards,
There is one thing you can see, it's not hard,

Something that will ALWAYS be true,
My never-ending love for you!

And by the way.....we ARE going on a date tonight! 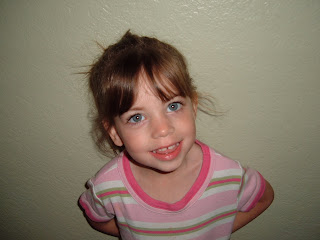 Today is our baby girl's third birthday! She has been such a joy in our lives and we couldn't imagine life without her!

Chloe is our quiet, shy little girl. She loves babies, horses, playing dress-up and pretty dresses. The other day we tried to put pants on her and she was highly offended. She LOVES her dresses! We can't wait for her to open up her new, VERY girlie dress today!

We love you, sweet girl, and pray that this day brings you much joy! While we're in no rush for you to grow up, we look forward to what God has in store for your life. Happy Birthday Mimi!
Posted by Candace/Chloe at 8:04 AM 7 comments

One of the kids' favorite family activities is movie night! We let them stay up late and eat lots of junk food, while enjoying a movie! What's not to like, right?

Last Friday night was no exception! We spread out the trusty old blanket and donned it with popcorn, chips and guacamole, cake, pink lemonade and S'mores! They had a great time! 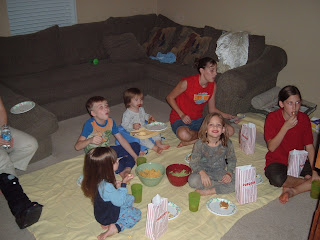 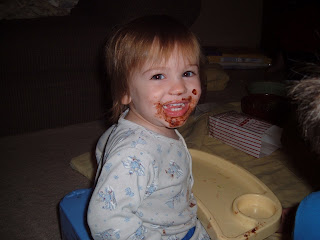 Posted by Candace/Chloe at 4:10 PM 7 comments

The handsome guy in this commercial is my brother, Jeremy. He and his family live in Montana. He is not a professional actor (although he could be), but I'm sure he had fun doing this!


......with a little help from our friends! Today was the first day Greg had to return to work since I broke my foot last week. I think I was more worried about the girls having to bear the brunt of the responsibility, while I just sit here! As good as sittin' around sounds, I can't help but feel guilty that they're having to do so much! I was able, however, to get some schooling done with the kids. They know all too well that schooling can be done from the couch, as they've learned many times from my pregnant sick days! So, at least I feel like I accomplished something today!

After nap time, we had a visit from a long time friend of mine, Robin. She and her granddaughter brought me flowers and cookies to brighten up our day! It was so good to have the company! Just as they were leaving, my sweet friend Adeana and her girls brought us a lovely meal that could feed an army......and I mean a bigger army than what we have here! The meal was not only wonderful, but very much appreciated, especially by my girls after a long, tiresome day!

And speaking of meals, I can't thank my friends enough for the meals we have coming.......our sweet church family and our HOPE group have set up the Care Calendar for dinners to come for the next couple of weeks! WOW!!! What a blessing! Thank you sweet friends!

Well, the foundation of our new home was poured this morning. And since we could not be there, our sales rep took the time to drive out to our lot and snapped a ton of pictures for us. So, now that the foundation has been poured, our estimated completion date is December 10th. There are still no bites on our current home, but we trust in God's perfect timing and His perfect plan, even if that means we don't move into the new house at all! We'll just continue praying!

Have a wonderful week!

I am so excited that I have to ask for prayer first, and then I'll give an update about my foot!

My midwife called me today with some promising news. She said there's been some BIG breakthroughs with our particular insurance company and that they may cover a home birth after all. Initially, they were going to cover between 40-50%, stating that my midwife would be paid as an out-of-network provider. That just wasn't enough coverage for us at this time. But, Janet has since found out that they may be required to cover fully, or at least more than before! I won't know anything for a couple of weeks, but I'm very excited about the possibility and wanted to ask for prayer!

Ever since we made the decision to revert back to a hospital birth, we have continued praying that God would, somehow, allow us to home birth after all! We'll see what happens! I'm so thankful to Janet for continuing to pursue our insurance company! Go Janet!

Okay, now the foot! I'm fine.....pain is minimal.....still can't believe I was that clumsy! At my ortho appt today, I was relieved to find out that, due to the nature of the break and location, I could be put into a boot instead of a cast! YIPPEE! I was fretting a cast all day yesterday, knowing I would not be able to get to all those pesky itches! With the boot, although it's heavy and actually hurts more, I can remove it for showers and SCRATCHING!  I still have to remain on crutches for a couple of weeks, and trust me, pregnant women and crutches do NOT mix, but I'll go back to the ortho doc in two weeks to see what's next.

Once again, thank you for your prayers, your love, and your kindness in helping to take care of our family! We are blessed beyond measure and are continually amazed by the actions of God's people at work!
Posted by Candace/Chloe at 1:44 PM 5 comments

Greg sent this to me this morning from work!

It's a must see! It's unbelievable!

It's hard to believe that infants can be trained in this way!

Photo Credit
Posted by Candace/Chloe at 8:31 AM 9 comments

One of the many ways our family has been able save a little money has been by avoiding the salon or barber when possible. I have been cutting hair since I was a teenager and this has come in handy for our growing family. I am not a professional and have had no formal training, I just seemed to have had a knack for cutting hair.  And I had many opportunities when I was young.

My brothers were my first victims customers, and then my sister offered her head as a sacrifice practice model. And that led to some of their friends asking for hair cuts.

So when I married Greg, well, naturally I would convince him to let me cut his hair as well. What a nice man!!!

Recently, Cheyenne has shown an interest in learning how to cut hair. And since it is our goal to train our girls in all aspects in the art of homemaking, now is the perfect time to begin. The last few "training sessions" consisted of her just observing while I talked about and demonstrated different techniques. Today was the big cutting day......and what a good daddy to allow his head to be used for training purposes! 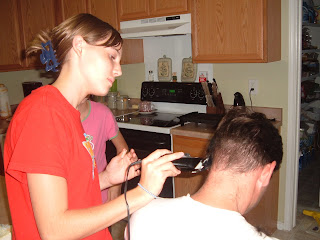 Cheyenne did a great job and I can't wait for her to be able to cut hair on her own to take some of the load off of me!


So here you have it....our freshly cut men! 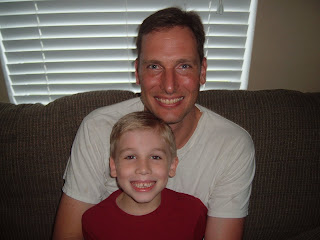 Posted by Candace/Chloe at 4:27 PM 1 comments

The New Gospel: Appealing but Not Revealing

I always enjoy coming across great articles that contain a meaty bite! It's in regards to the state of the American church and how we've become more like "cotton candy" rather than "holding up the standard of holiness"!

It's a bit lengthy, but well worth the read!!!

Read it here.
Posted by Candace/Chloe at 7:59 AM 3 comments