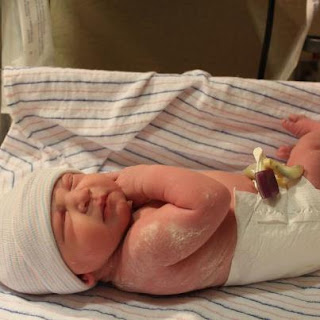 I couldn't believe it.  We had gone from the joys and celebration of giving birth, to now facing a potential CPS situation.  And all over refusing Vit K and eye goop!

When we initially refused the treatments, the nurse was caught off guard.  She wasn't sure even what to do.  She said she would need to discuss it with the nursery staff and go from there.  When she returned, she handed me a refusal form and informed me that we would most likely be reported to child protective services.

Let me see if I understand this.  I can smoke cigarettes throughout my entire pregnancy if I wish to, and I can even choose to kill my baby in utero if I want to, but I can't decline a Vitamin K shot, or eye ointment that protects against exposure to STDs I know I don't have, without being reported to CPS?  Are you kidding me?

Needless to say, our joy quickly turned to frustration.  The nurse left the room and we all discussed the situation.  Do we stand firm on our decision?  Or do we submit and give the shot.

Because we have no moral objection to Vit K, we decided to go ahead and let them administer the shot.  Somewhere in all of this, I thought all the fuss was over the shot alone.  Even though I knew it was my right to refuse it (which we had in several previous births), it wasn't worth CPS getting involved.  We've been there before, and it isn't pretty! (Someday,  I will write about it.)

The nurse administered the shot.  A few minutes later, she came back with the eye ointment.  I was confused. I immediately said we were not allowing the ointment and told her we had only agreed to the Vit K.

At this point, something inside me changed.  This was now a matter of principle!  No one was going to tell me what I could and couldn't do with MY child!  I told the nurse we would not be taking the ointment and that they could do whatever they needed to do about it.

Once she left the room, I asked one my friends present to read the refusal form that we had been given earlier.  She pointed out several issues on the form, the most important one being that we would essentially be admitting to harming our child by refusing the treatments.

We explained the issues with the form to the nurse and she told us we would need to sign something or she would be held responsible.  I told her I would write a statement taking full responsibility for my decision and would not hold the hospital or the staff responsible, but that I would not sign a form that incriminates me as a parent.

In the meantime, all we kept hearing was that this was the law.  In the state of Texas, the law requires the hospital staff to administer the eye ointment.  The law is a little tricky here because it does not prevent parents from refusing.  If the hospital has not checked their ointment box, they can be fined or even serve jail time.  No wonder they bully their patients.

Conversely, the Vitamin K shot is not required by law, however, you are required to sign the same incriminating "I'm-a-bad-parent" form if you refuse it.

By now, it's approaching midnight.  Greg and I are exhausted.  The nurse informs us that we will need to speak with Risk Management.  We weren't sure what to expect, but we said we would.  A short while later, a woman from RM calls me on the phone to discuss the matter.  She was very pleasant.  She asked me what was going on, and I informed her of every detail, even down to how our parental rights were being stripped away from us.  I also read her some of the ambiguous statements on the Refusal Form, and told her we could not sign a form in which we are admitting to harming our child.

She agreed with every word I said!

In fact, she wasn't even familiar with the form and agreed that parents should not be threatened with CPS for refusing these things.  I told her that I would gladly write my own statement taking full responsibility for my decision.  She said that would be fine!  She also said she would further investigate the whole CPS threat.

Shortly after speaking with RM, the nurse came back with a blank sheet of paper on which to write my statement.  I wrote my statement and then signed it.  When I gave it back to the nurse, she apologized for the situation.  Once she realized that we were informed parents, exercising our right to make decisions on behalf of our child, she was in our corner.  She continued to apologize throughout the evening.  We really appreciated her kindness and sensitivity toward us, and felt badly for her, that she would dare be held accountable for our decisions.

To make a potentially longer story short, all turned out well.  We were never reported to CPS, and everyone left us alone once we signed our statement.  The staff treated us with care and respect, and we were back to baby bliss!

The next morning however, when we refused the Hep B shot (to which we do have a moral objection), we were handed the famous form.  Again!  And again we were not going to sign it.  I found it quite interesting that they use the same form for "treatments" that are both required and not required by law.  Intimidated moms don't stand a chance against these types of bully tactics.

Funny enough, no one ever came back for our refusal form, so we averted another statement signing session.  And at exactly the 24 hour mark, at 10:00 PM, we were discharged and on our way HOME SWEET HOME! 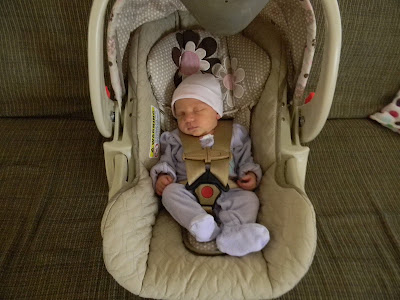 Now, on a personal note: I struggled with all of this for a couple of days.  Since we had no moral objections to the Vit K or the eye ointment, I wondered if refusing them was the right thing to do.  After all, even Scripture tells us to submit to the governing authorities unless it's something contrary to the word of God.  (Keep in mind, we had refused these in the past without incident).  Was this something worth fighting for, or should we just quietly go along?

But as my husband and I thought and talked more about it, we were sure we did the right thing.  Our parental rights are being stripped away more and more every day!  By submitting to even these small scenarios, we are slowly giving the government more control and power over decisions regarding our children.  God has given us charge over our children, not the government.  We've read too many stories recently in the news where children are being removed from their homes because their parents made an informed decision about homeschooling, or a vaccine, or a medical treatment.

**Please note that I am not saying you should do or think the same.  Every parent must weigh the situation, pray, and proceed as God directs.  This is simply how we feel/felt.**

Because we are growing increasingly concerned about our parental rights, we are investing more time and effort into keeping them.  You can too by going to parentalrights.org and signing the Proposed Parental Rights Amendment to the U.S Constitution petition.  You can also watch Overruled and share it with your friends and family.

Despite those few hairy hours, nothing could overshadow the joy of bringing a precious new life into the world.  We are so thankful for our beautiful Grace, and thankful for God's grace, abundantly poured out upon us!

Have you had a similar experience?  Do you decline Vitamin K or Eye Ointment?  What would you have done if you found yourself in a similar situation?

Posted by Candace/Chloe at 7:42 AM