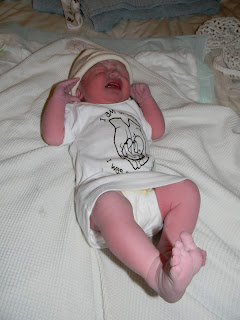 You can read Part 1 here.

Our baby was finally here.  We didn't know whether we were having a boy or girl, so the added excitement of meeting our baby girl was wonderful.  Greg went to wake up all the kids to meet their new sister.

I remained in the tub, snuggling this precious life while we waited for the cord to stop pulsing.  Once it did, Daddy cut the cord and I passed off baby Amelia so that I could get out of the tub.  Amelia had her newborn check up in the meantime.  All was going well and my bleeding was minimal. 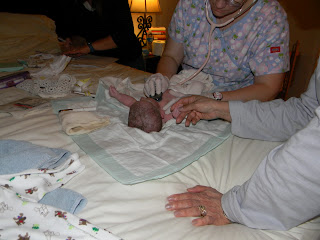 I am a bleeder, so the midwives were prepared with Pitocin and Methergine just in case I needed it.  I was so relieved that everything was going well.

But as soon as I stood up to get out of the tub....GUSH!  Janet and I looked at each other with the look of "uh oh", and I quickly jumped out of the tub and ran for my bed.  After what had happened the last time, I did not want to be stuck in the tub.  I felt that as long as I made it to my bed, I would be fine.

My uterus did not want to cooperate.  I was immediately given the first shot of Pitocin to help my uterus contract.  Janet worked diligently to massage my lower abdomen to help my uterus to stay firm.  It would firm up, and then get boggy.  Meanwhile, my blood pressure was dropping quickly and everyone was beginning to get nervous.  I was given a second shot of Pitocin, but it still wasn't helping.  This cycle continued on for some time.

I could feel myself slipping away.  I knew instinctively to lie as still as possible as to not exert any energy to allow my body all it needed to work.  I began praying.  I couldn't believe this was happening again!  I kept praying that I would not pass out like I did after Genevieve's birth.  I felt that as long as I stayed conscious, I would be okay.

While Janet continued checking my blood pressure and massaging my belly, Robin tried to start an IV line.  I was already on oxygen by then, but needed fluids.  Robin could not get a vein.  Suddenly, she darted out of my room and I began to get scared.  I didn't know where she was going in such a hurry.

She came back quickly and gave me a shot of Methergine.  Methergine helps to coagulate the blood.  I've had it before in other births, and it's helped.

I could feel myself getting closer and closer to losing consciousness.  I kept praying.  I was thinking about my mom and older girls, and how scared they must be to see me go through this again!  Thankfully, my husband had a hunch that things were going to get bad, and had already ushered the little ones back to bed.

As I laid there, and things kept spiraling downward,  I heard Janet say my blood pressure was 50 over 30.  I looked at my friends and family, who all stood at the foot of my bed watching this unfold, gather in a circle to pray.  Let me just say here, that as much as I appreciated the prayer, this really scared me!  I felt that my life was on the line and that if I lost consciousness, I would not wake up.  I prayed that God would keep me awake!

Right at that moment, after the blood pressure reading, Janet very calmly told everyone that she was going to call 911 as a precaution.  My uterus would not stay firm and I was losing a lot of blood.  My husband's fingers were already on the buttons, and he called for an ambulance.

My mom stood at the foot of my bed and mouthed the words "I love you, Candace".

Meanwhile, baby Amelia was being held by the people who surrounded me.  I was so thankful that she was safe and with the people I loved while all of this was happening. 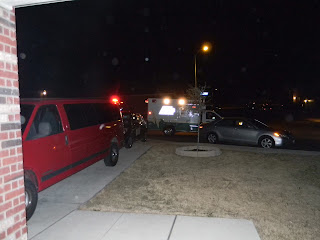 The ambulance arrived and they worked quickly to get me onto their gurney.  They asked if the baby was going too.  This is where it got really hard for me.  I wanted my baby to come.  I hadn't even been able to nurse her yet and I just wanted her near me.  But, if she went with me, she would have to be admitted as a patient along with me too.  A quick discussion ensued.  How would I leave my newborn?  But once I realized that I didn't want her to go through all the hospital checks, which would have been more involved coming from a home birth, I knew she had to stay home.

My heart was broken!

I didn't know how long it would be before I would get to see her and nurse her.  I asked if someone would bring her to the hospital soon.  Janet said that as soon as she was finished with her full check up, someone would bring her.  The midwives spent at least an hour trying to stabilize me, that Amelia had not been weighed and measured yet.

I was comforted to know that she would be with me soon.  As the paramedics were wheeling me out, I heard friends discussing who could come and feed Amelia.  They mentioned my friend, Shannon, because she had just had a baby a couple of months before.  As much as I wanted to nurse my sweet baby, I was glad they were planning to call Shannon to bring some of her breast milk.  And she lived nearby.

Once in the ambulance, the paramedic tried to get an IV in me.  He had trouble, so I was stuck multiple times.  Janet remained with me, right by my side, still massaging my lower abdomen.  My husband followed behind the ambulance.  Finally, my uterus was staying firm and my blood pressure was rising.  Of course, the whole time I was thinking, "See, if we had just waited TEN more minutes, all would have been well!"  But I know Janet was doing what she needed to do and wasn't going to risk anything!  I love Janet!

We arrived at the hospital about 4:30 am.  I had to endure a very uncomfortable exam in the ER, and then was sent up to L & D.  Thankfully, the paramedics were able to take me to my hospital, so I felt at home in a sense.  But I still worried about how I would be treated as a home birth transport.  The doctor in the ER was not nice....and even scolded me for delivering at home.  But the rest of the staff was wonderful.  Everyone treated me with kindness and respect!

As soon as I was taken upstairs, I immediately began asking when Amelia would get here.  I was told in the ambulance that she was a little cold, and couldn't leave the house until her temperature came up.  Robin, the assisting midwife who stayed with Amelia, gave her to my mom for skin to skin contact to regulate her temp.  Amelia had also had all of her newborn checks by then. 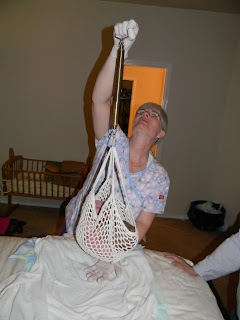 A bit later, after Janet called home to get another update, she informed me that my friend Shannon had just nursed my baby.  I guess the look on my face said it all because Janet asked if I was okay with that.  I told her that I didn't really have a choice at that point.

Honestly....I was crushed!  Another woman nursed my baby.  That was a hard one for me to grasp.  When I heard the discussion about calling Shannon to help, I had envisioned her bringing extra milk from her freezer and bottle feeding Amelia.  Not actually breastfeeding her.

But once I had a chance to process everything, I eventually saw it as a blessing.  I realized how sweet and precious it was for Shannon to come and nurse her friend's baby!  And in the middle of the night too!  Poor Amelia was hungry! 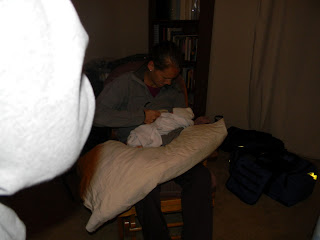 I think most moms can relate to how I felt.  I was physically exhausted.  And I was emotionally fragile since I had to leave my newborn.  I just needed some time to see the beauty and God's provision in all of it.  And when I heard that sweet Shannon saw it as a privilege, I was so grateful!  I will be forever thankful for Shannon's loving heart! 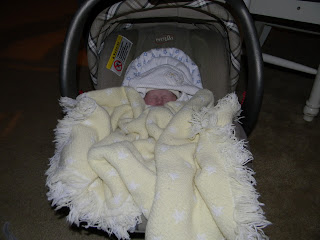 At last!  Robin and Cheyenne (my oldest daughter) finally brought Amelia to me.  I was SO happy to hold her and to get a good look at her!  She was so beautiful!  From that point on, she was able to stay with me in the hospital.  The staff brought me a baby bed for her and she never left my side!  The staff was phenomenal.  They welcomed me and Amelia and took very good care of me!  Later that morning, I was able to see my own doctor.  He ordered a couple of tests just to make sure everything was okay.  All the test were good, so I was able to go home later that evening!

It was so wonderful to be back home with my whole family.  My poor younger kids went to bed with me still in the tub.....but woke up to find me, and the new baby gone!

I am so thankful for God's protection over me that night.  I'm thankful for the midwives knowledge, how prepared they were, and for their calm, sweet spirits!  Unfortunately, this means I will not be able to birth at home again.   Due to my bleeding history, it's best that I deliver at the hospital in the future.

Just in case anyone is asking either of these two questions, I'll just go ahead and answer them here.

*If you had an emergency situation after your first home birth, why did you feel it was safe to have another home birth?

So glad you asked!  The cause of my bleeding after my first home birth was due to a tiny piece of placenta that did not fully detach.  So my body continued to feed a placenta that was not there.  Once the midwife did a manual D & C (lots of fun!) to remove the tissue, the bleeding stopped.  That had never happened before and it was something we wouldn't expect to happen again.  This time, it was a result of my uncooperative uterus!

*If you have a history of bleeding, why would you consider having more children?

Great question!  Well, I thought the same thing!  After what had happened, I really thought that I should not have more children...that I would be risking my life.  But when I spoke with my beloved doctor at my 6 week post-partum visit....I asked him this very question.  I was prepared to heed his warning about future children.  But he reminded me that I did NOT have to have a blood transfusion.  And that if we did decide to have another baby, that he would start pitocin immediately after the baby was born, instead of waiting to see how my bleeding does, like he's done in the past.  He would take every precautionary measure necessary.  Janet and Robin came prepared.  I just needed more than what they had on hand..

So that's my story....and why I've been reluctant to relive it through writing it.  I am still a huge advocate for home birth!  I feel that if a woman is a good candidate, home is the best place to be.  But I'm also thankful that I have a great doctor, and feel comfortable at the hospital where I've delivered five of my babies in the past!

God is good!
Posted by Candace/Chloe at 2:32 PM