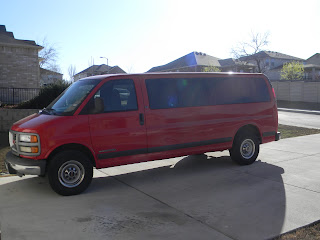 Give thanks in all circumstances; for this is the will of God in Christ Jesus for you.
1 Thessalonians 5:18
Last week﻿, we had an exciting adventure at the Walmart gas station.  Our van, "Clifford", broke down.  At the pump.
At first, it wasn't a big deal.  I thought for sure it was something minor that my older girls and I could fix.  After 30 minutes of trying to diagnose the problem, we didn't know what was wrong.  At this point, we knew we needed to move the van away from the pump in the event Clifford was going to spend the night at the gas station.
My future son-in-law had come to help, and one man pumping gas next to us jumped in to try and help as well.  All we had to do was move this 15 passenger van to a parking spot.  Just so happens, we were at the ONLY pump in the gas station that was in direct line to a parking space.  Thank you, Jesus, for directing me to that pump!
Just as we were about to push the van into the spot, approximately 50 ft away, a car pulls into it.  I immediately ran to the gentleman and kindly asked him if he would park elsewhere so that we could push the big red van into his spot.  Without hesitation, he moved his car....and we pushed Clifford safely into the spot.
By this time, the man who was already helping us had diagnosed the problem as a bad fuel pump.  I knew that we would not be able to fix the fuel pump in the parking lot, so at this point, we just needed to get home.  A friend had already been called to come and get us, and was on her way.
Before our friend had arrived, the man I had asked to move his car, drove over to us and asked if we needed help.  We told him that it was probably the fuel pump and that we wouldn't be able to do anything until the next day.  It was just getting dark by then.  The man, Frank, asked to take a look.  He suggested that it could just be the fuel filter..and that if it was, he would change it for us right there in the parking lot.  He got on the phone with Auto Zone, where he used to work, to see if they had the part in stock.  They did.  Frank took off to his home to get some tools and the part.  What a nice man!
Our friend, Bethany, had come by, picked up most of the kids and took them home.  The kids did great and had a wonderful opportunity to practice patience.  They were tired, bored, and hungry...it was well past dinner time for them and they had been sitting for nearly two hours.  I was so glad when they were able to get home!
Frank returned, changed out the filter, but it wasn't the filter after all.  How sweet of him it was to check the less expensive possibility first...and do it for us.  Well, then...if that wasn't sweet enough, Frank gets back on the phone with Auto Zone to inquire about a fuel pump.  They have one in stock.  I told Frank that I would need to talk with my husband (who was at work) to find out if he would be able to fix a fuel pump on his own.  Greg is the one who fixes most things on our vehicles, but I knew he had never fixed a fuel pump, mainly because you have to drop the entire gas tank.  A BIG job on a BIG van!
So Frank says, "I'm off tomorrow and can fix it for you, free of charge!"  Say WHA???  Who IS this guy and why does he want to spend his day off fixing a total stranger's HUGE RED VAN?

On a side note, when Frank got into our van to try and turn it over, before the kids were hauled home, he looked back at all the kids and asked, "Are they part of a daycare?"  I literally laughed out loud!
Back to the story!  We were so humbled over Frank's kindness.  And sure enough, the next day, he and Nathan (my future son-in-law), both spent their day off under Clifford.  For about five hours.  In the Walmart gas station.  In one little parking spot.  Isn't that incredible?
There are so many more details about this story that I would love to share, but just don't have the time to get it all down right now.  Let's just say that God orchestrated this whole occurrence in such a unique way, and involved several  people.  Only God can do such an amazing thing.
We are SO thankful for Frank and Nathan, and all the others who helped over those two days.  As much as I did not like the fact that our van broke down, and with a costly repair, I couldn't help but marvel at how God worked in such a way to weave a beautiful tapestry of kindness, generosity, and grace.  I had no choice but to praise Him!

On another side note....we found out that Frank goes to the same church where my OB doctor attends.  Small world! :)

This post is linked up to The Marathon Mom.
Posted by Candace/Chloe at 2:48 PM