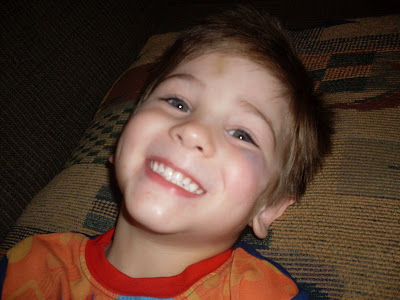 It never fails.......whenever the kids are having a blast playing together.....someone ends up getting hurt. On this day, it was Ethan and Genevieve. All the kids were running around playing Follow the Leader when the two of them collided. Though they were both hurt, Ethan's the one who walked away with the visible proof. ;-)

He took it like a man and is quite proud of his black eye....which looks MUCH worse now than it does in this picture (I'll have to get another pic). Don't ask me about the bruise on his forehead.....who knows where that came from. He's a boy, after all!
Posted by Candace/Chloe at 11:28 AM