I'm Not Convinced of Abuse Yet! 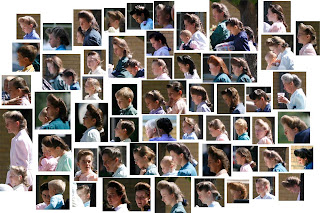 This is a story that has been pretty heartbreaking to me! Although I certainly don't agree with Mormon practices, especially polygamy, I'm not convinced this is the "dangerous" situation it's made out to be. So far, it seems as if there has been NO concrete evidence of abuse! All I can think about is how these precious young children have been torn from their families and don't understand why! Imagine these little ones crying in strange beds each night because they miss their mothers terribly! And as moms, how would we feel? I can't imagine.

Here's what I've been reading:

Scott Henson, in an article for the Dallas News, said this:

"In Eldorado, no one alleges YFZ parents are themselves abusing children. Instead the allegation (in court, at least) is that they're teaching their kids that a woman's highest calling is giving birth and raising children and that it's acceptable to get married at an early age. Even if it were true, and the allegation was disputed, can this really be enough to seize children from their homes?"

I keep hearing about abuse, but where? I haven't heard of one verified instance of abuse being found. Who gets to decide what we're allowed to teach our children and what should be considered "dangerous" or "cultish?" The state? Here's a quote from MSNBC that should give us all pause:

“Experts and lawyers fear the children's transition to foster care may be much harder than it is for other foster children...Many of the children have seen little or no television. They have been essentially home-schooled all their lives. Most were raised on garden-grown vegetables and twice-daily prayers with family. They frolic in long dresses and buttoned-up shirts from another century.”

Such abuse! How horrible! Let's rip these poor children from their families before they miss out on the necessary and oh-so beneficial experience of MTV and the hook-up culture.
From the same article, Mr. Henson addresses the judge:

"Excuse me, Judge? You issued a sweeping, house-to-house search warrant based on a highly questionable anonymous call that turned out to be phony. You refused to allow individual hearings for children, grouping them together like cattle. You accepted the testimony of an expert on "cults" who only learned about FLDS from media accounts, rather than an academic who'd studied them professionally for 18 years.

You've ruled the existence of five girls between 16 and 19 who were pregnant or had children was evidence of systematic abuse, even though in Texas 16-year-olds can marry with parental consent. You've ruled young toddlers are in "immediate" danger because of their parents' beliefs or what might happen 15 years from now, not because anyone abuses them.

From the evidence presented publicly, I do not believe that the children have been sexually abused or physically harmed. Allegations of forcible rape turned out to be bogus, and only five girls 16 to 19 years old were found pregnant or with children – probably about the same ratio you'd find if you rounded up all the kids in my neighborhood.

Instead, I wonder what it would be like for these children to be torn from a loving family by people whose message is this: Everyone who loves you is bad. Everything you believe is wrong. The God you've been taught is a fraud, and belief in Him is harming you."

And Tim Lynch, of the Cato Institute, had some interesting thoughts:

"State authorities talk a lot about rape and forced marriages, but 300 children are ages 4 and below. They should be sent home because there is no evidence of abuse. All the boys should go home because there’s no evidence of abuse. As for the remaining girls, they have been held for 3 weeks already … the judge should give the police one more week to present evidence or they should be going home too. The investigation can continue, but 3+ weeks in custody is enough already.

"When it comes to separating children from the parents, the burden of proof must be borne by the state."

And another must read: "Increasingly I'm coming to think that the case against the Eldorado polygamist compound may be a setup job." - Scott Henson

"Don't get me wrong: True pedophiles should be prosecuted to the full extent of the law. But that's a little different than changing the law to redefine historic religious practices by a particular sect as "pedophilia," which is what Rep. Hildebran did. Similarly, there's a big difference between investigating an individual, anonymous complaint from a single teenager, and forcibly taking 419 children away from their homes based on guilt by association.

I'd feel the same way if the state decided to seize all the children of parishioners in a Catholic church whose priest had been accused of pedophilia. What's the difference between that and what's happening in West Texas based on allegations against one man?

As Fox News' Greta Van Susteren declared, "being weird isn't a crime." And the alleged crimes of one man don't justify violating the rights of hundreds. When we identify "weird" people whose religious beliefs we don't like and pass laws criminalizing that behavior, as Hildebran did, to me that borders on "prohibiting the free exercise" of religion. This whole episode strikes me as grandstanding and overkill." - Scott Henson

And what about this:

"SAN ANGELO, Tex., April 23 -- The phone calls that triggered a massive raid on a polygamist compound in west Texas -- in which a quavering girl's voice described being forcibly married at 15 -- have been linked to a Colorado woman with a history of making false claims of sexual abuse, according to an affidavit filed in Colorado Springs.

The affidavit says calls that allegedly came from "Sarah Barlow" -- a teenage girl at the Yearning for Zion Ranch outside Eldorado, Tex. -- actually came from numbers connected to Rozita Swinton, 33, [State Democratic Delegate] of Colorado Springs. The affidavit also notes Swinton's possible involvement in a series of separate but similar reports in which the young caller described being abused by a pastor, an uncle or her father."

I think it's about time these children are sent home!!! For another intersting perspective, read here!